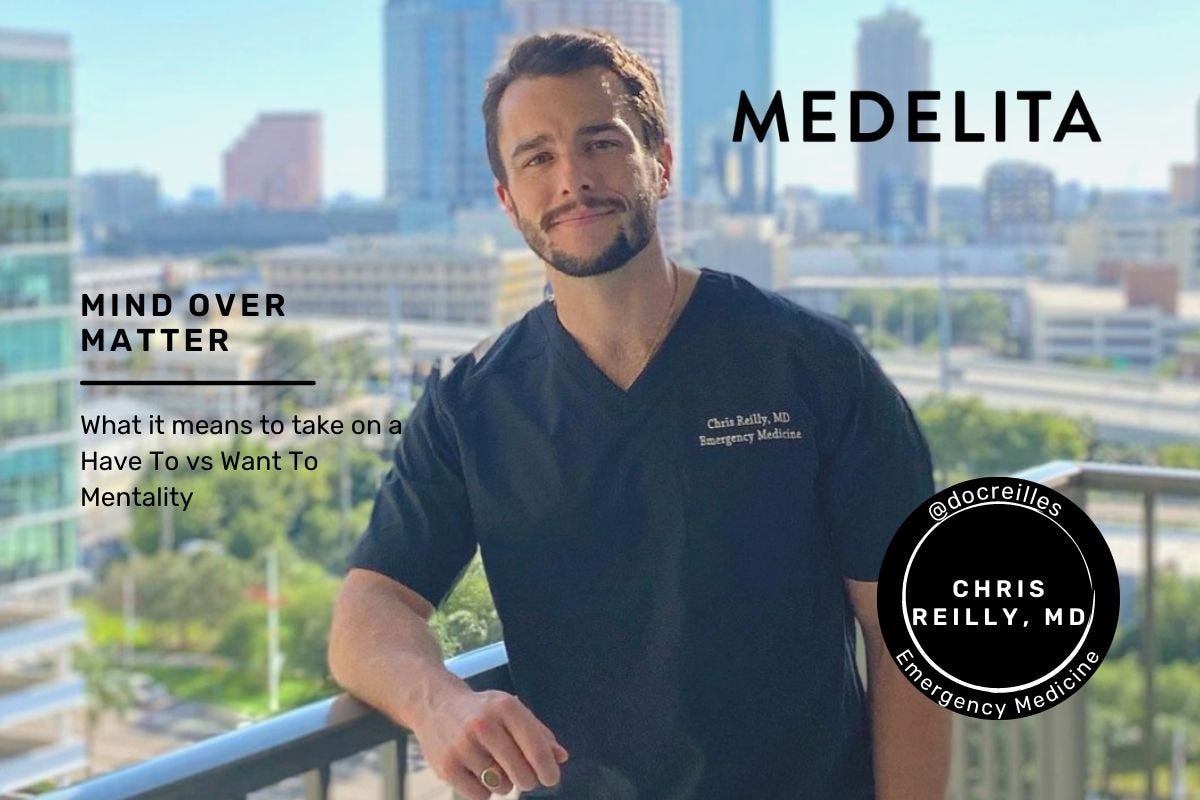 Dr. Chris Reilly is an Emergency Med Resident with a passion for paying it forward. Check out his advice on what it means to take on a Have To vs Want To Mentality:

Most people see the accomplishments but never witness the journey. On the road of life, we tend to see everyone for what they possess  or what they post on social media. I promise you, it’s not all rainbows and butterflies folks. You should know that there will always be someone that’s wealthier than you, smarter than you, more good looking than you, etc. AND THATS OK! Focus on your life and what you can control! Keep your blinders on and know that you are your greatest competition. Realize that when you fail, so has every successful person throughout history. There’s loss, there’s setbacks, there’s times when you question yourself and if it’s worth it to keep moving forward. These are some of the moments that define a person. You can quit or you can be RESILIENT. Use your failures to motivate you and move forward.

Here’s an example from my life. I frequently get asked the uncomfortable question of “How did you end up at a Caribbean School after going to such a great undergrad program like Johns Hopkins?” When I first heard this, I was taken aback and kind of hurt. Eventually I took it in stride and was honest with people about my struggles.

By the time I graduated from undergrad, I didn’t have a great GPA. I constantly told myself “I can’t compete with these kids!” And defeated myself before I had the chance to be the student I knew I could be. I put in countless hours but the academic rigor my institution expected for premeds was too overwhelming. On top of this environment, I was also playing a collegiate sport, that took even more time away from studying! More and more students are now realizing in order to be competitive to US medical schools you need to take “gap years”. This is so common now that the average age of a first year medical student is around 26 years old! So after my undergrad, I earned my MS in Biomedical Sciences. This program helped me figure out exactly how to study at the level of a medical student, but still my GPA was not where it needed to be. After earning my masters, I scribed for a year in the ER while applying to medical school AGAIN.

I received a few interview invites, but was eventually rejected from every single one AGAIN.... I was broken, upset and felt like giving up, but I still pushed as I truly believed medicine was my calling. It was then that I applied to St George’s in Grenada after meeting several ER docs that also studied there! This is when I started my  journey to the MD I have today. I invested in myself when no one else would. This happened through many life lessons learned through my failures.

The decision to move forward even after being defeated over and over is one of fortitude. Fall down seven times stand up eight. If you want something bad enough you WILL eventually get there. The only thing holding you back is YOURSELF! Everyone has a different path and this was mine with the same end goal in mind: becoming a doctor.

Dr. Reilly is wearing the APEX Scrub Top & SUMMIT Scrub Pant. For more information, be sure to contact him on Instagram: @docreilles