We're surprised every day by our colleagues working in medicine and their commitment to important causes that save and improve the lives of others.  It's rare, however, that we're this overcome with pride and excitement by a colleague that has and is truly making a difference in the precious lives of those who need it most. When we awarded Dr. Kanani Titchen a $25,000 honorarium last month, our only goal with the money was to make the life of one truly exceptional medical resident easier by providing them a means to reduce their sizable debt burden.  This wasn't a requirement, however, and Dr. Titchen had the freedom to do what she pleased with the money.  To our humble surprise, she donated a significant portion of her award toward several organizations leading in the fight against child sex trafficking. In light of recent events that have spawned a new discussion about gender differences in the U.S. and their attitudes toward each other, Kanani's most recent donation to GEMS (Girls Educational and Mentoring Services) is especially appropriate. This morning we received the following letter from GEMS Founder and CEO, Rachel Lloyd:

If you're not familiar with GEMS and it's mission, read up on it here.  It's an organization that was formed, "in response to an overwhelming need for services for girls and young women at risk for commercial sexual exploitation and domestic trafficking who were being ignored by traditional social service agencies."  Its ultimate mission is "to empower girls and young women, ages 12–24, who have experienced commercial sexual exploitation and domestic trafficking to exit the commercial sex industry and develop to their full potential." As Kanani has told us, child sex trafficking is not isolated to remote, unpoliced regions of the world but is happening every day in U.S. cities and across America in astonishing numbers (100,000 - 300,000 children are at risk for commercial sexual exploitation annually in the U.S.) .  We recognize and fully support the need to put an end to this practice everywhere, and feel very strongly that it won't end everywhere until we can put a stop to it in our own community first. 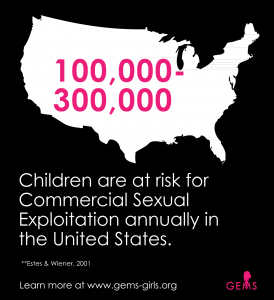 Please learn more about GEMS by visiting http://www.gems-girls.org/ and follow them on Facebook: https://www.facebook.com/girlsarenotforsale or on Twitter: https://twitter.com/gemsgirls We are especially proud of Kanani and look forward to working with her to promote this important mission.