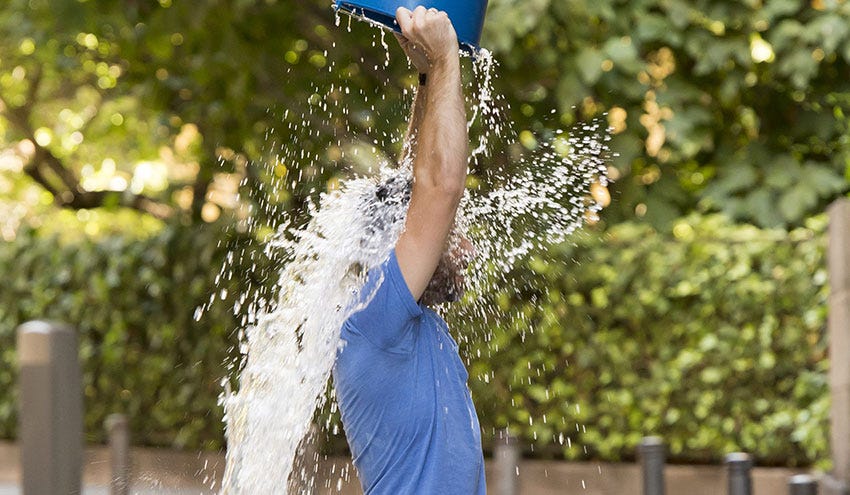 The ALS Ice Bucket Challenge went viral in 2014. Who could forget that summer when all your social newsfeeds were filled with videos of friends and colleagues finding new, creative ways to dump a bucket of ice cold water on themselves?

The challenge required the participant to film themselves dumping a bucket of ice and water over their head with the goal of raising awareness for amyotrophic lateral sclerosis (ALS), alsocommonly known as Lou Gehrig’s disease. Once asked, the participant was given 24 hours to either complete the task, or asked to donate $100 to the ALS Association.

ALS is a progressive neurodegenerative disease that affects nerve cells in the brain and the spinal cord. As degeneration of the motor neurons occur, people with ALS lose muscle control and voluntary muscle action is affected. They can lose the ability to eat, speak, move, and breathe. Oftentimes, this loss of muscle control leads to death.

ALS usually occurs in people between the ages of 40-70, and approximately 20,000 Americans are afflicted by the disease. Although ALS was discovered in 1869, it gained national and international attention in 1939 when ALS ended the career of Lou Gehrig, a popular American baseball player.

In total, the challenge raised $115 million for The ALS Association.

Two years after the Ice Bucket Challenge went viral, we can see the fruits of our cold, wet labor. With the money raised from the challenge, The ALS Association was able to issue a $1 million grant to Project MinE, a large-scale research initiative devoted to discovering the genetic cause of ALS. They plan to map the full DNA profiles of at least 15,000 people with ALS and compare them to DNA profiles of 7,500 control subjects to uncover associations between specific variations in genes and ALS.

The $1 million grant provided by The ALS Association, thanks to the Ice Bucket Challenge, created the resources for Project MinE to expand their operations. This expansion allowed Project MinE to identify mutations of the NEK1 gene as a contributing factor to ALS.

Found in 3% of patients with ALS, the discovery of this gene’s connection to the disease provides another focus for therapy development.

"The sophisticated gene analysis that led to this finding was only possible because of the large number of ALS samples available," said Dr. Lucie Bruijin, Chief Scientist at the ALS Association. "The ALS Ice Bucket Challenge enabled The ALS Association to invest in Project MinE's work to create large biorepositories of ALS biosamples that are designed to allow exactly this kind of research and to produce exactly this kind of result."