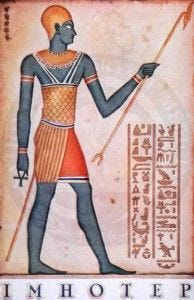 The burial chamber was cold as I stared wide-eyed at the golden mask beneath the glass. I was young, and though the artifacts were well-made replicas, The Tutankhamun Exhibition in Dorchester, England was magical and mysterious nonetheless. In that moment, my fascination with Ancient Egypt (and history as a whole) was born. While I could happily dedicate pages to Tutankhamun, it wasn't until approximately 1000 years after his death that the world's first Type A personality emerged in Imhotep. Imhotep served during the Third Dynasty as chancellor to the pharaoh and high priest of the sun god Ra at Heliopolis, though his list of roles and accomplishments extends far beyond that. In fact, the full list of his titles includes Chancellor of the King of Egypt, Doctor, First in line after the King of Upper Egypt, Administrator of the Great Palace, Hereditary nobleman, High Priest of Heliopolis, Builder, Chief Carpenter, Chief Sculptor, and Maker of Vases in Chief. How many of us can claim so versatile a skill set? While Imhotep is also recognized as the world's first named architect and credited with building Egypt's first pyramid, it is his role as history's first doctor that led me to choose him as a subject for today's post. In fact, our own William Osler named Imhotep the real "Father of Medicine" - "the first figure of a physician to stand out clearly from the mists of antiquity." As a physician, Imhotep is believed to have diagnosed and treated over 200 diseases, including tuberculosis, appendicitis, and gout. He also performed surgery and practiced dentistry. As the credited author of the Edwin Smith Papyrus in which more than 90 anatomical terms and 48 injuries are described, he is notable for being one of the first doctors in history to approach medical knowledge from a perspective void of magical overtones - a like-minded ancestor of Hippocrates, who would live some 2,200 years later. For all of us, the paths we walk in the modern world echo with the footsteps of our ancestors. While the forefathers of marketing likely involve loud men selling fish from stalls, for medical professionals, your proud path began with the sandy steps of this remarkable man.