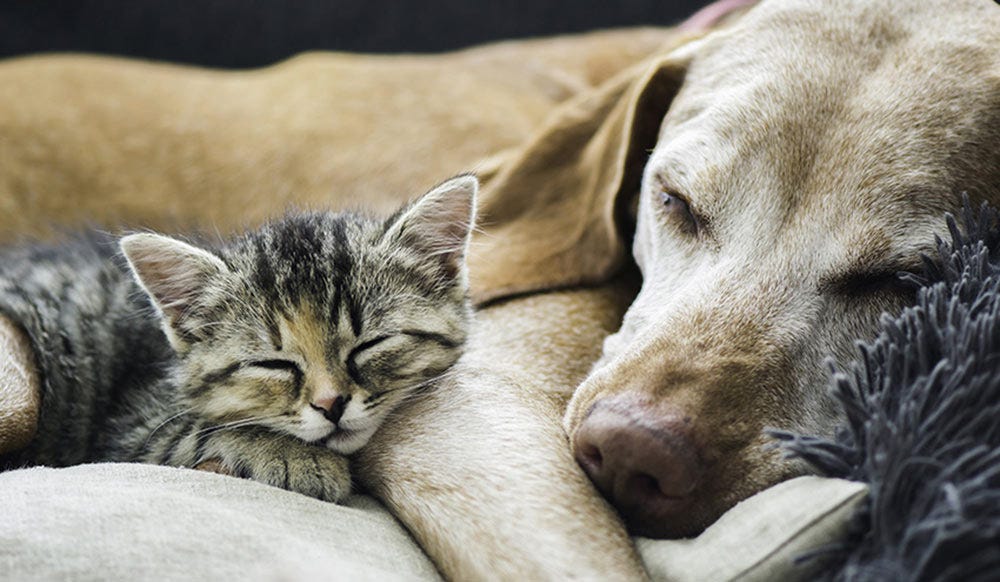 There are many commonalities between humans and our pets, particularly in terms of environmental factors such as pollutants, second hand smoke, food additives, chemicals in tap water, and other chemicals. The genetic structure between humans and domestic animals is also similar. In fact, dogs have a genome 90% identical to humans. Therefore, it stands to reason treatments for cancer would be similar or the same between humans and animals.

Comparative Oncology is the study of naturally occurring cancer in domestic animals (dogs, cats, horses, etc) and developing treatments from these studies that are useable for both animals and humans.

Our pets with naturally occurring cancer are perfect subjects to test new, improved treatments because study results can be processed faster than with human trials. Many types of cancer found in humans occur at the same rate or higher in dogs and cats, creating a larger test population. Additionally, dogs and cats are an appropriate size and have structural similarities that allow for refinement of surgical and other techniques that may also be effective in humans. Rodent-based cancer studies simply cannot provide this information because they are too small for some techniques, and they do not have as many similarities as dogs do to humans.

Clinical trials involving animals is always subject to concern about ethics of treating animals who are unable to exercise any form of free will. However in the case of comparative oncology, these concerns can be eased because of how the animals are treated. It's important to note that the animals used in these studies are those with naturally occuring cancer, and they are often owned privately - meaning their owner is the one who gives approval of their companion's participation. Further, the Institutional Animal Care and Use Committee (IACUO), has established recommended guidelines for the treatment of study animals that include the following:

"All patients enrolled in clinical trials, whether studied with or without a control group, must receive best supportive care." -IACUO guidelines

This means that the animals who participate in these studies are able to receive pallitative or hospice care, treatment that is "focused in order to maintain or improve quality of life". These animals actually do experience better quality of life as a result of participating in these studies - their pain and suffering is assuaged by compassionate, ethical veterinary treatment.

Exploring the potential of new treatments

Purdue University’s Comparative Oncology Program (PCOP) is working on a number of clinical trials. PCOP researchers work hand in hand with the Cancer Biology Laboratory, other laboratories at Purdue, and with scientists from other institutions across the country, hoping to bridge the gap between animal treatments and human treatments.

The Canine Bladder Cancer Clinic at Purdue University was created over 20 years ago. This clinic and its trials study urinary bladder cancer in dogs, specifically invasive transitional cell carcinoma (TCC), which is virtually identical in dogs and humans. The cancer has the same cellular and molecular features, it spreads with the same frequency and to the same organs, and both humans and animals respond similarly to treatment. Over the past 20 years, researchers have changed the outlook for dogs with TCC from “little to no hope” to a “highly treatable cancer”. Treatments being used at The Canine Bladder Cancer Clinic include Folate Targeted Therapy and Epidermal Growth Factor (EGF) Directed Toxin.

Although human clinical trials have not yet started for these therapies, given the fact there are 10,000 deaths from invasive bladder cancer in humans per year in the U.S. alone, hope is high that researchers will find these treatments work just as well on humans as they do on dogs. PCOP is also studying canine lymphoma and canine brain cancer.

Although comparative oncology recently came to prominence within the past decade or two, hopes are high that with the help of our furry friends, we can find better, more efficient cancer treatments for our pets and ourselves.