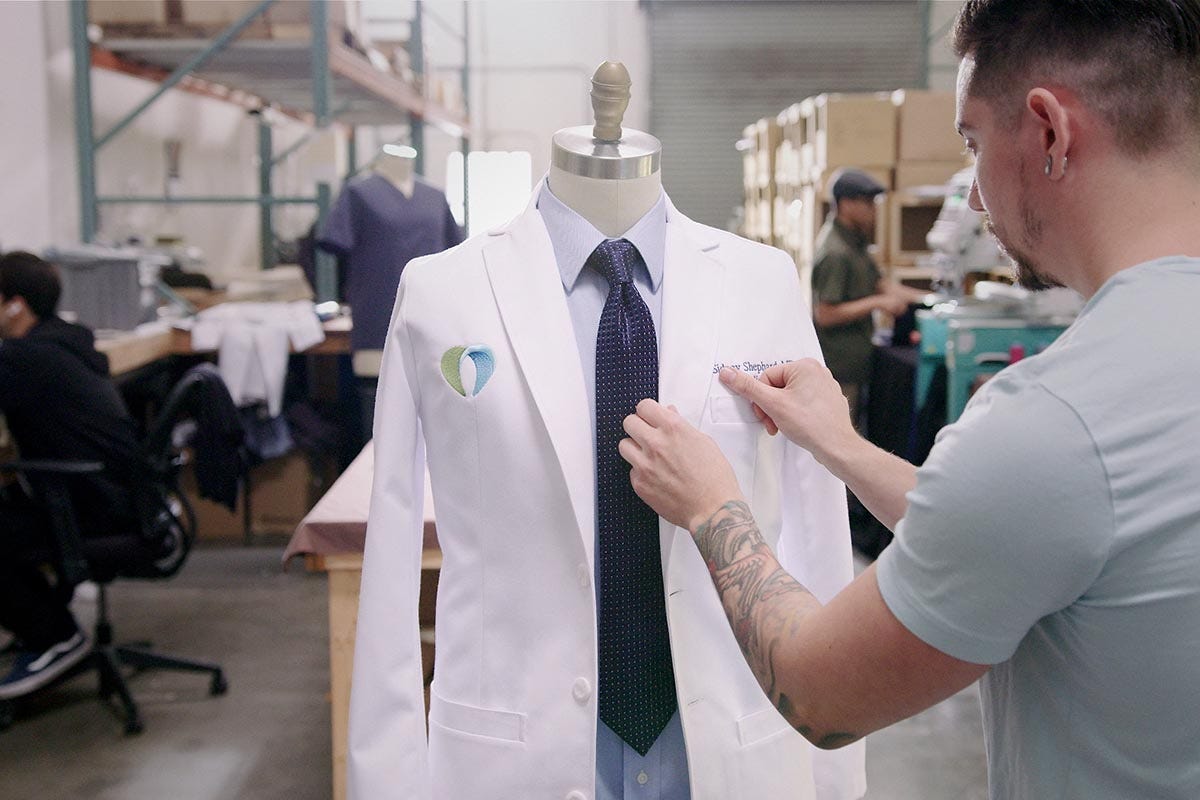 When one envisions a judge, a dignified black robe and gavel comes to mind.

When one thinks of a police officer, it’s a fitted blue uniform and eminent gold badge.

And when it comes to doctors, a long, white lab coat is what makes these life-saving individuals stand out as the professionals we trust our health and well-being with every single day.

However, over the years some physicians have begun to reject the use of white coats in the medical setting. Some physicians simply think white coats are outdated and unnecessary, and personally prefer a more casual look on the job. There are also health and safety concerns posed by the potential spread of germs and disease via labcoats, which some European countries have reacted to by adopting “bare below the elbow” policies in medical settings.

The argument against the use of white physician's coats in medical settings is twofold: the idea that the coats are unhygienic and spread bacteria, and the belief that patients prefer to see their doctors in more casual attire. However, evidence collected on the subject seems to be debunking both of these arguments.

Chris Petrilli, chief medical resident at University of Michigan, explains that there is actually no documented study that proves the transmission of germs via white coats.

Petrilli explains, “Everyone has bacteria, simply by existing, so bacteria on white coats is not a novel premise for risk.”

Certain European countries have implemented a "bare below the elbows" policy for physician uniforms in an attempt to combat hospital-borne infections. Yet as Petrilli pointed out, these policies have not seen any correlation to a notable decrease in the spread of bacteria within a hospital. The only real difference in preventing the spread of germs is simply following proper protocol when physicians wash their hands.

As for patients' perception of casual vs formal medical uniforms, Petrilli is part of a team at University of Michigan Health System (UMHS) currently researching the importance of physicians’ attire and the affect it has on patient interaction and satisfaction.

The first part of the study, published in the British Medical Journal in January 2015, looked at 30 existing studies that evaluated how patients viewed the work clothes of their physicians, 18 of which had directly positive associations with white coat attire.

Speaking from personal experience wearing a white coat, Petrilli notes that patients have specifically called out his team on how professional they look and how this simple choice in professional attire increases the patients' confidence in the care they’re receiving. Patients are also much more likely to turn to a student dressed in a white coat than one dressed in casual attire. Petrilli is an ardent believer that there is a definite positive correlation to formal attire and patient satisfaction, whether the patients are consciously aware of it or not.

This subconscious affect also increases the sense of professionalism in the individual wearing the white coat. Petrilli explains that when you enter a room wearing your white coat, it gives you a sense of pride in front of your patients.

This pride is a principle that is instilled on the very first day of medical school, with the white coat ceremony, when students first receive their short coats as a symbol that they have begun their journey to becoming a physician. And then, when they’ve completed their education they attend another ceremony where they receive a long coat, the official uniform of a physician.

“It’s symbolic of taking care of patients,” says Petrilli. “That’s the symbol of the white coat in my mind.”

The team at UMHS is currently expanding its research to an international level. Petrilli points out that the problem with existing studies about physician attire is that they’ve used individual surveys, made for a specific medical setting. In contrast, he and his team have worked with psychologists to create a survey that can be used across all settings, including inpatient, outpatient and ophthalmology, to see if acuity of illness has any notable effect on patient satisfaction and perception of care. The survey shows participants seven images of both male and female physicians dressed in various types of work attire, from a white coat with formal attire, to scrubs, and even a business suit.

The team is collecting data from University of Michigan, Harvard University, the Mayo Clinic’s Campus in Florida, Georgetown University, University of Washington, as well as multiple universities in Italy, Switzerland and Japan. Petrilli anticipates that his team will have all data collected by late summer or early fall of 2016.

In the meantime, while physicians’ attire does not seem to have any drastic effect on healthcare business or quality of care, it is a job factor that every medical professional should take seriously. As Petrilli’s mentor at UMHS, Vineet Chopra, previously advised, formal attire in any non-operative medical setting is a must for meeting patients’ expectations and maintaining a sense of professionalism.

“Clothing for doctors is more than just a matter of personal style: it is an emblem of their specialty, training and culture.”

And the white coat is without a doubt at the center of that culture.