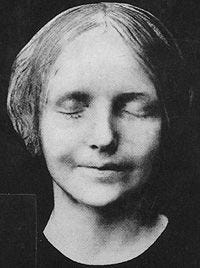 Her face has been compared to the Mona Lisa - yet she bears her enigmatic smile in the absence of life. It is a face that I am willing to bet everyone reading this has seen. I'm even willing to bet that you've kissed her once or twice. In the late 1880's, the body of a young woman was found in the Seine River in Paris. There were no signs of violence and many suspected suicide. Though theories have run rampant over the past century, her true identity even to this day has never been proven.

"Her beauty was breathtaking, and showed few signs of distress at the time of passing. So bewitching that I knew beauty as such must be preserved"

... said the Parisian mortician who created a death mask of the woman. It's said that authorities displayed the death mask in the hopes that someone could identify her, and while no one did, she quickly captured the attention of the world. The mask, known as L'Inconnue de la Seine (The Unknown Woman of the Seine), was widely reproduced - a morbid treasure among art collectors. 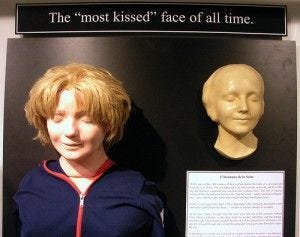 She has inspired books, songs, and obscure movies, yet she is most recognizable as the face of Resusci Anne, also known as 'Rescue Anne' or 'CPR Annie'. In 1958, Peter Safar, an Austrian physician, and Asmund Laerdal, a Norwegian toy maker, created the first CPR mannequin. According to popular theory, the L'Inconnue de la Seine was hanging on the wall of Laerdal's parents' house. The toy maker visited while he was working on the mannequin, and he was bewitched by her face. Therefore,  Unknown Woman of the Seine  became the face of Resusci Anne. The Romantics among us claim she's the most kissed woman in history; others whimsically say that every year, thousands of people try to bring the drowned woman back to life. However you choose to view it, her face has undoubtedly saved millions of lives and her mystery remains intact. Personally, I'd like to think she's smiling so mysteriously because she knew what the future held. What are your theories about the Mona Lisa of CPR?