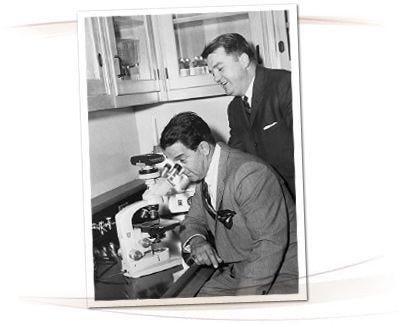 I recently visited with my mentor, Dr. Pinkel, and had the privilege of hearing his stories about the inception of St. Jude Children's Hospital, a place that has changed the lives of millions. He tells me about getting cards from his patients who now have their own grandchildren! The pride in his voice and love for his patients, even those he had fifty years ago, is so obvious. He is 87 years old this year, suffers from post-polio syndrome (he nearly died from the disease as a resident), and won't be around forever, I know. I am so pleased to hear these stories, and share them here.

Danny Thomas recruited Dr. Pinkel to be the medical director of St. Jude, as he had started a pediatric cancer center where he had done his residency, in Buffalo, NY. He refused. He didn't want to move to Memphis, and Memphis didn't want the hospital there anyway. Danny continued to call him, and he finally accepted the job after receiving some advice from his own mentor: "You're young. If it flops, you can always do something else." Don Pinkel accepted the job under two conditions. The first was that the hospital would accept all patients, regardless of ability to pay. The second was that it would be fully racially integrated, from the patients all the way up to senior staff. A pretty controversial demand, for a Southern state in 1959.

As I sit talking to him, his wife, also a pediatric hematologist/oncologist, tells me she is preparing to go to Memphis for the 50th anniversary gala to represent him as he is unable to travel now. The gala, which many celebrities attend, is to celebrate the hospital's first opening it's doors in 1962, and is specifically honoring the first five medical directors, of which Dr. Pinkel is the first. He tells me in detail about the other four, who is still living, who is coming to represent each. He tells me about the influential researchers he recruited to come to Memphis, how he wouldn't get off the phone with one young man- for seven hours- until he agreed to come. How another man, a virology researcher, was eager to come to Memphis and study cancer after losing his wife at age 34 to a particularly virulent breast cancer. (At the time, they thought ALL came from a viral source mutating DNA. Keep in mind how new of an idea DNA was in the late 1950s).

I am amazed by this history. I'm laughing at his mentor's comment, that if it flops, he can always do something else- knowing the global presence of St. Jude's in 2012. The thought that a virus caused leukemia. The realization of how significant racial integration was at this time. Everything he said, fit into the framework of today, realizing how different our framework might be had he done something else with his life.

And I secretly wish I could go to the gala to represent him too, because I am so proud of him. And also to meet Gwyneth Paltrow and Jennifer Aniston. I just know we'd be friends.

Medelita Guest Blogger: Dr. Anne Kennard. Anne is an OB/GYN resident in Phoenix. She has kept a collection of writings about medicine/becoming a doctor since her second year of medical school, and we’re honored to welcome her as a guest blogger for Medelita.