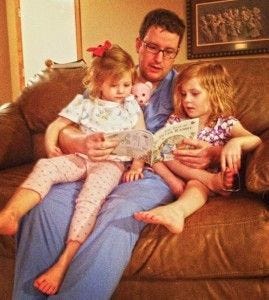 David graduated from the University of Rochester, New York medical school. He did so not only as an accomplished doctor in medicine, but also as a father of two with one on the way. He is an incredibly caring individual who places medicine and family as his top priorities, at great personal sacrifice. These attributes provided him with a perspective that is far more mature than many of his peers. Inspired by his amazing wife and children, David not only graduated at the top of his class, but matched into one of the most competitive sub-specialties at one of the most competitive programs in the country: ENT at the Mayo Clinic. Otolaryngology – Head and Neck Surgery truly chose David. While competent in each of his core rotations as a medical student, David quickly fell in love with surgery. Surgery today is not what it once was. The complexities now require a greater degree of specialization much earlier in training, however, for David, the choice of what surgical sub-specialty to pursue was made clear to him by a sentinel event in his life when his mother developed thyroid cancer. Treatment of her cancer required not only surgery but subsequent radioactive iodine therapy as well. Watching and supporting his mother going through this ordeal solidified David’s desire to enter into Otolaryngology. His desire to give back to the specialty that helped his mother has been exemplified by his outstanding patient care on a day-to-day basis. While many residents “put their heads down” to get through the grueling training period of residency, David takes the time to listen and support his patients as individuals, as a family member would. His empathy and dedication to his craft make David the doctor you hope cares for your mother if she were to be diagnosed with cancer. During high school, David was not only a dedicated student, but was again dedicated to giving back to his community. Unlike most high school students, David’s community did not just include his local neighborhood, city or state. David’s community brought him all the way to Lithuania where he lived and served for two years. During that time he provided community service to those in need, taught English as a second language, and explored his faith as a missionary for his Church. These experiences opened David’s eyes to the world as a larger stage than the community he had grown up in. It helped to crystallize for him his desire to serve those in need and improve the lives of those around him in the most profound way he could: through medicine. Most medical students and residents will tell you that medical school and residency leaves little time for people outside of the hospital. Caring for patients, learning the craft of medicine, studying the art of surgery, and learning how to function as an independent physician leaves little time for some of the most important people in our lives…our family. However, David has managed to juggle these demands on his time with absolute brilliance. He is the proud father of four adorable children. When you are with his family, it is clear that he is not an absentee father. After returning from a long day, he takes the time to read to his children, watch the “plays” they have created, and tuck them in at night. He and his wife have provided their children with a warm, full, and loving home despite making a single resident’s salary. This is no small feat. Vote for David here.

If you know a resident that deserves to be recognized, please nominate your candidate here.