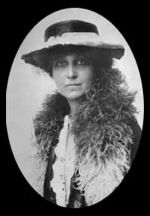 "She carried herself like a ramrod. Little old woman she was not. She was a grenadier." Katherine Dexter McCormick (1875 – 1967) was a U.S. biologist, suffragist, and philanthropist. She was the second woman to graduate from the Massachusetts Institute of Technology (in 1904) and the first woman to receive a science degree from MIT (major in biology). Katherine had originally planned to attend medical school, but her plans were postponed when she married Stanley McCormick, heir to the International Harvester fortune. Two years into the marriage, Stanley developed schizophrenia and was soon lost to dementia. He was declared legally incompetent in 1909—only five years after their wedding. Katherine turned her attention then to philanthropy and actively pursued the role of women’s rights activist. She became vice president and treasurer of the National American Woman Suffrage Association and organized much of the efforts to gain ratification for the Nineteenth Amendment. She firmly believed that a woman's right to control her body was as important as her right to vote, and it was during her suffragist days that she met with legendary birth control activist Margaret Sanger - for whom Katherine smuggled diaphragms into the US during the 1920s. In the 1950s, when the United States government, medical institutions and the pharmaceutical industry wanted nothing to do with controversial contraceptive research, Katherine McCormick (at age 75!) singlehandedly funded the development of the first oral contraceptive pill. She gave approx. $2 million to the research of Gregory Goodwin Pincus, a scientist that had been working on hormonal methods of birth control, and she took an active role in the development of the Pill. When the Pill came on the market in 1960, the scientists and doctors involved in developing it were thrust into the spotlight for their contribution to science. Katherine McCormick was a footnote in the coverage, yet she deserves credit for her dedication and contribution to what The New York Times called the “most sweeping sociomedical revolution in history. . . [whose] impact on the United States and other nations [is] almost too vast to analyze.” Her other philanthropic efforts included the establishment of the Neuro-Endocrine Research Foundation at Harvard Medical School, a $5 million dollar donation to Planned Parenthood, and a $1 million dollar donation to Worcester Hospital for a research and care facility for the mentally ill. In addition, she supported women’s education at MIT by donating money to build the Stanley McCormick Hall – the first all female dormitory at MIT. Katherine also donated $5 million to the Stanford School of Medicine for the encouragement and assistance of women pursuing the study of medicine and biomedical research.