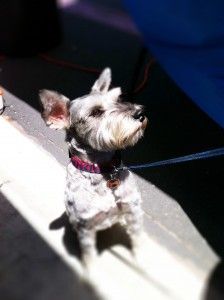 My first day working at Medelita, I was greeted with a growl. After the first few weeks, the pitter patter of paws on the stairs would announce the arrival of Max just before he barreled into my office. He still growled, but the meaning had shifted from "Who are you and why are you in MY territory?" to "Ahem, excuse me, but you stopped petting me and that's unacceptable!" Our offices have since moved, and Dan, our eCommerce Manager, has joined Lara and I in the part of the Medelita office dubbed 'The West Wing'. Thankfully, Dan doesn't growl at me (although he growls at his computer a lot), and I have to say that I often miss that pitter patter of paws. Our canine mascot Max belongs to Sandra, our Production Manager, who admits that she didn't always love dogs. "I never wanted a dog in my entire life. I thought they were dirty, smelly, disgusting . . . just gross. I thought for sure I would definitely get another cat," said Sandra with a laugh. But it's clear to see that Sandra and Max are a match made in doggy heaven, and Max has a sad story with a very happy ending. Max was adopted from a puppy mill, and his tail was docked too short - leaving him with one little spinal nub. A first-time dog owner bought him, and because she was a workaholic, poor Max lived in a cage for 12 - 14 hours a day. Not long after, she decided that having a puppy was too much responsibility, and Max was abandoned at a dog groomers. Luckily, the groomer worked with Hearts for Hounds and decided to take care of Max until a home could be found for him. However, that meant that he was still confined to a cage for most of the day. A friend of Sandra's owned a shop next to the dog groomers, and they offered to watch the four-month-old puppy during the day so that he could run around and play. According to Sandra, "I came walking in to visit my friend, and our eyes met from across the table. I said I would take Max for a week until he could find a home. After a week, I couldn't give him back." We're certainly glad she couldn't, and everyone who meets Max has a tendency to fall instantly in love with him. Sandra has had Max for almost three years now, and he's living the doggy dream. When he's not visiting Medelita with mommy, he's playing with other dogs at Bark! Bark! doggy daycare. He even flies to Seattle for Christmas with the family. Like most dogs, he loves treats and table scraps, but he also has a unique fondness for carrots, tomatoes, pumpkin, string cheese, and salmon. A dog of discerning taste, he doesn't like pretzels, spinach, and popcorn without butter. As the Medelita mascot, Max even has a love of fashion. "He's got a lot of dog collars. He likes to mix it up, and he has a lot of sweaters hand-knit by mommy. His new one says 'Coffee, Tea, or Me' on the back," said Sandra. It's a simple choice in my opinion - as much as I love coffee, nothing is quite as refreshing as a dose of Max in the morning.