The history of medicine is an incredibly fascinating subject and is often quite grisly - but grisly is a bit of an understatement when it comes to three particularly unique medical books housed in the Mutter Museum at the College of Physicians of Philadelphia. These publications - all focused on the subjects of women's health and obstetrics - are bound in the skin of an Irish widow named Mary Lynch, who died in 1869 at the age of 28.

Mary Lynch was hospitalized in the summer of 1869 for tuberculosis, but her death was ultimately brought about by a much different cause. During her hospitalization, Mary's loved ones brought her pork and bologna as a treat so that she could take a break from unappetizing hospital food. This kind gesture resulted in Mary becoming infested by the parasitic roundworm Trichinella spiralis, often known as "pork worm". Six months later, weighing in at a mere 60 lbs, Mary died.  Her cause of death was unknown until after an autopsy was performed by Dr. John Stockton Hough. During the autopsy, Dr. Hough found a disgustingly large number of parasitic worms in her chest cavity and determined that Mary's cause of death was due to a severe case of encysted trichinosis. He later published a sickeningly graphic report on her autopsy in an 1869 edition of the American Journal of Medical Sciences. 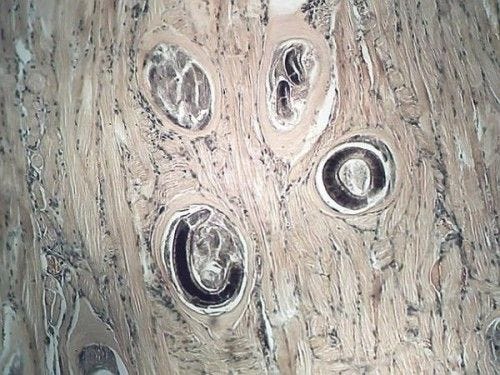 Before Mary was buried in the hospital's pauper's grave, Dr. Hough took a slice of skin from one of the cadaver's thighs. Over the course of the next several months he tanned the skin in a chamber pot in the hospital basement, but it wasn't until 20 years later that he actually used the human leather. Because he waited nearly two decades before using it, Dr. Hough's exact intentions for removing Mary's skin are unknown. But indeed, in 1887, practically 20 years after the death of Mary Lynch, Dr. Hough used her tanned skin to bind three medical volumes: Speculations on the Mode and Appearances of Impregnation in the Human Female, Le Nouvelles Decouvertes sur Toutes les Parties Principales de L’Homme et de la Femme, and Recueil des Secrets de Louyse Bourgeois (published in 1789, 1680, and 1650 respectively). Each book contains a brief note that explains the unusual origins of the leather binding it. Dr. Hough would have used one of two processes to turn Mary's skin to leather in the basement of the hospital, though experts can't be certain of which. The traditional 19th century method of tanning was to soak the hide in lime water, manually scrape off any flesh and hair left over, and continue soaking the hide in a bath of tannin for several weeks or months. The second, less conventional method of tanning was to soak the hide in urine, which has been used to tan leather for thousands of years. 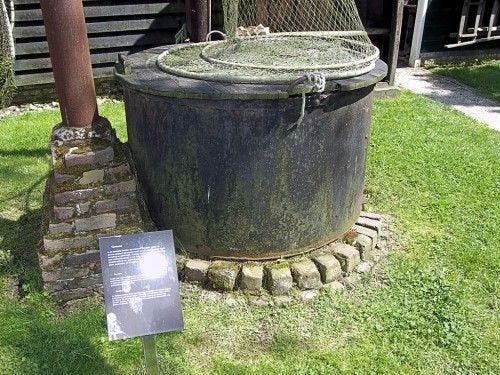 Vat of chemicals to tan leather.

It is interesting to speculate about which method Dr. Hough used in Mary's case. Would he risk his career and reputation by bringing in conspicuously large amounts of the chemicals needed for the first method? Or would he have chosen to use urine to tan Mary's skin, a substance that he had access to in abundance? No one knows for certain. The volumes bound in the skin of Mary Lynch's thighs are not the only books covered with human skin, though they are (understandably) highly rare. The reason behind the rather nauseating practice was for a doctor to immortalize a dead patient as a memorial to the person, or for the skin of executed criminals to bind their trial records in order to preserve the shame of their crimes. Anthropodermic books (the term for human-bound books) have been discovered that date as far back as the 1500's, though the practice of binding books in human leather seems to have been most common in the 19th century.