Watching television as a medical professional can be awfully frustrating. Some common medical goof-ups on the silver screen include poor oxygen supply to patients who have been operated upon, depictions of hospitals having more physicians than nurses, doctors operating outside of their specialty, and absolutely terrible sterilizing procedures. In this article, we've rounded up the top five medical blunders of Hollywood.

In the 2014 finale of Scandal, the president’s son is murdered by being poked by a needle infected with meningococcal meningitis. Two minutes after he has been unwittingly stabbed by this needle on his shoulder, he begins hemorrhaging and dies several hours later. To begin with, it would be hard to assuredly infect someone via a prick on the shoulder, which is mostly muscle mass. Second, meningococcal meningitis takes longer to kill people than the time between commercial breaks. His death would have been much slower, and although we can allow the producers some leeway to create plotlines, this death was just medically inaccurate.

In the movie X-Men Origins: Wolverine, the main character’s love interest, Kayla Silvertooth, fakes her own death by injecting herself with a chemical that slows her heart and body functions. One might think that a movie series featuring superpowers and other impossible feats of reality wouldn't have any trouble creating an ominous-sounding pharmaceutical name, but for Kalya's pseudo-death the producers actually decided to use the name of a real medication: hydrochlorothiazide. In a plot twist meant to evoke shock and awe, most medical professionals probably couldn’t hold back their laughter at the thought of the character taking a diuretic drug to slow her heart down. Cue images of Kayla Silvertooth accidentally peeing in her pants.

Image courtesy of Areeya at freedigitalphotos.net

The producers of the TV drama 24 made an error that most viewers wouldn't recognize, but that any trained anesthesiologist would notice immediately. In an episode from last June, Jack Bauer needs to sedate a woman for several hours, giving him enough time to pull off several hijinks. He injects Kate in the neck with a syringe of clear liquid, claiming it to be 5 cc's of propofol. There are three medical blunders here. First, propofol is a milky white liquid, not a clear liquid. Second, 5 cc's of propofol is barely enough sedative to put a woman of Kate's build to sleep for 10 minutes maximum--nowhere near as long as is claimed in the show. Finally, it is incredibly dangerous to inject the propofol directly into the back of the neck, which is mostly muscle. A sedative such as this should be administered through a large vein or artery where it is unlikely to cause damage.

In the classic Tarantino masterpiece Pulp Fiction, Uma Thurman’s character, Mia, mistakes John Travolta’s character, Vincent’s high-octane heroin for cocaine and snorts a huge line of it, triggering an opiate overdose. After driving an unconscious and foaming at the mouth Mia to his drug dealer’s den, Vincent marks the location of Mia’s heart with a magic marker and stabs her in the heart with a large hypodermic syringe of epinephrine, or adrenaline. Mia immediately jumps back to life, a little shaken up, and they all go home at the end of the night. In real life, opiate overdoses are treated with Narcan, which targets nerve clusters in the brain, rather than adrenaline, which is used to stimulate cardiac function. It is also extremely risky to administer this kind of drug through a syringe directly to the heart; a slight misaim can lead to collapsed lungs or damaging important blood vessels. But since the scene took place in an opiate dealer's living room in the early 90's rather than a sterile hospital in the 2000's, we won't hold it against Tarantino for taking some artistic license in creating one of the most unforgettable scenes of cinematographic history.

Doctors around the world are being driven mad by Hollywood’s casual portrayal of electrically shocking patients with a defibrillator whenever their heart rate stops. The Julia Roberts movie Flatliners was almost entirely based upon this false premise, although in reality the flatlining of a patient’s heart—asystole— is not affected at all by electric shocks. A patient's heart stopping is treated by alternating doses of epinephrine and atropine. Electric defibrillation is only effectively used in cases of ventricular fibrillation and ventricular tachycardia, irregular heart rhythms that look like hills and mountains on a heart rate monitor, not a flat line. 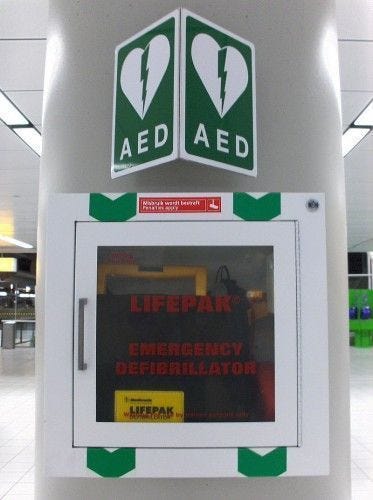