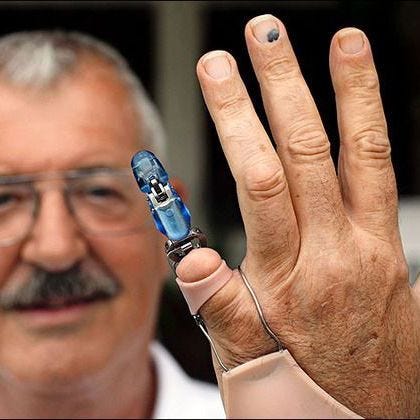 Dennis Aabo Sorensen has become the world’s first amputee with a bionic fingertip. The bionic fingertip connected to the nerves of his upper arm enables him to feel textures in real-time.

Sorensen lost his hand in a firework accident more than 10 years ago. He said the sensations he felt with the electronic fingertip – which was surgically hard-wired to nerves – were almost the same as those he felt with his real hand.

The artificial fingertip was created by scientist Silvestro Micera of the Ecole polytechnique federale de Lausanne (EPFL) in Switzerland, and scientists from Scuola Superiore Sant'Anna (SSSA) research institute of Italy.

Electrodes implanted in the nerves of Sorensen's upper arm were connected with an array of sensors in the fingertip. A machine moved it across rough and smooth plastic surfaces. The sensors generated an electrical signal, which was converted into a number of electrical spikes – this was reportedly an imitation of the "language of the nervous system."

Sorensen was able to differentiate between the rough and smooth surfaces with an accuracy of 96%. He said:

“The stimulation felt almost like what I would feel with my hand. I still feel my missing hand, it is always clenched in a fist. I felt the texture sensations at the tip of the index finger of my phantom hand.”

Micera and colleagues tested the efficacy of the bionic fingertip for identifying textures on four non-amputees, according to a study published in the journal eLife.

An innovative mechanism called needle microstimulation was used in the process. The mechanism involves using a fine needle to temporarily attach the bionic finger to the participants through an electrode implanted into the median nerve of the upper arm. Motor and sensory stimulation is provided by the median nerve to parts of the forearm and hand.

The four non-amputees were able to distinguish between the two surfaces with almost 77% accuracy. The ability to use non-amputees for test the technology is significant because it means that further development of the technology won't necessarily require amputees as test subjects.

This technology may have other applications aside from prosthetics as well. Says SSSA's Calogero Oddo, "It will also be translated to other applications such as artificial touch in robotics for surgery, rescue, and manufacturing,"

The scientists commented on their overall results:

"The promising results obtained with microstimulation in four intact subjects, combined with robust translational indications from the hybrid model and an excellent outcome from one amputee, prompt the idea that neuromorphic stimulation could be a natural and effective tool for eliciting texture discrimination abilities via hand prostheses."