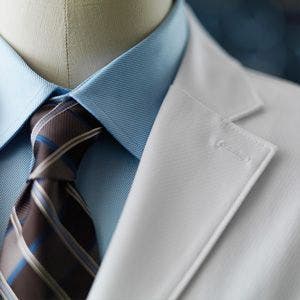 Labcoats were originally designed to protect the scientists wearing them from contamination they might be exposed to in the course of their work. In the early 20th century, as science gradually earned the respect of the masses, the labcoats scientists wore came to symbolize intelligence, reason and objectivity. The medical profession, searching for ways to distinguish itself from the charlatans and spiritualists who had dominated 19th century medicine, adopted these same labcoats in an effort to separate themselves from the quacks that preceded them. Today, labcoats are closely identified with physicians. Numerous medical apparel manufacturers produce generic lab coats competing with one another primarily on price, as a perusal of ads for labcoats so clearly illustrates. This has produced a “race to the bottom” evidenced by plain designs, cheap fabrics that seem to attract grime and stains, and workmanship that almost guarantees torn seams and pockets. There is one medical apparel company, however, in a “race to the top,” Medelita https://www.medelita.com/ / . Medelita, founded by a clinician frustrated and embarrassed by the labcoats she was required to wear in the Emergency Room at her hospital, has introduced fashion, fit, and function to the medical apparel industry. Physicians and scientists who take pride in their appearance, now have a source for labcoats and scrubs that enable them to feel good about the way they present themselves to their patients, colleagues and staff.
Back To The Team