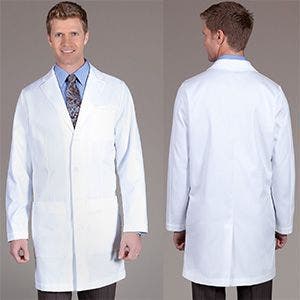 Manufacturing men’s lab coats may not seem the most likely path to small business success for Lara Francisco, founder of Medelita. But the circumstances are such that in looking back upon how it all happened, it seems almost providential. A Physician Assistant specializing in Emergency Pediatrics at major trauma centers in New York City and later in Orange County California thought her colleagues deserved better. For almost ten years she and her colleagues were required to wear unisex scrubs and lab coats for more than 2,000+ hours per year. While she loved her work, she loathed the uniform she was forced to wear to work every day. When she realized how many of her colleagues felt the same way, she took it upon herself to, at minimum, find an acceptable source for more complimentary clinician scrubs and lab coats. But there weren’t any. That’s when it occurred to her – maybe she should view this not as a problem, but as an opportunity, a business opportunity. Lara had always had an entrepreneurial spirit; so she starting her own uniform company. She reasoned that utilizing her first hand knowledge of what she and her colleagues really wanted and needed in their uniforms, she may be able to find a better way to deliver it to them. By 2006 she was running her ideas past an ever increasing number of clinicians, major apparel industry suppliers and experts, and potential investors. Over the next two years, while continuing to work as a PA, she meticulously assembled the key elements required to produce the best lab coats and scrubs available anywhere. In 2008, she launched Medelita www.medelita.com and in the process created a new paradigm for the medical apparel industry. Initially, the product line consisted of just one lab coat and one set of scrubs, both specifically designed to dramatically improve the fashion, fit, and functionality for female clinicians. This was accomplished by literally re-thinking every aspect of every element in lab coat and scrubs design. Female clinicians were so appreciative of the results of those efforts that in time their enthusiasm created another opportunity. As awareness of the demonstrable difference between Medelita lab coats and scrubs became more widely known, female clinicians in group practices started requesting them. In practices with both male and female partners, the men felt that since there weren’t any comparable men’s lab coats or scrubs available for them, they were being shortchanged with the dramatic upgrade in their female counterpart’s uniforms. They insisted that, in fairness, uniform upgrades of this magnitude must be offered to both the male and female partners in the practice. So, since no source existed for comparable men’s lab coats and scrubs, Medelita took it upon itself to do for male clinicians precisely what they had done for female clinicians – think “outside the box” on what a men’s lab coat or scrubs should be. The following list touches upon some of the fundamental changes Medelita introduced to the appreciation of male and female clinicians around the world: Lara Francisco is especially proud that the medical community has embraced her vision of what Medelita and Medelita Mens higher quality better fitting scrubs and lab coats. As the company continues to grow so will the company’s workforce which is also a sense of pride. The team at Medelita understands their customers’ needs, are committing to delivering the best possible service to compliment the very best lab coats the industry has to offer in a positive, fun and special work environment. Consequently, entrepreneurship is alive and well, in a competitive industry, in a difficult economy, in one of the least likely of places – the marketplace for men’s lab coats.
Back To The Team