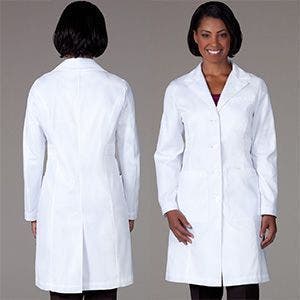 Improving women’s lab coats and women’s clinician scrubs was the full extent of what our founder was trying to accomplish when she embarked upon a journey to improve the professional appearance of herself and her female colleagues. As it turned out, the path she chose turned into an adventure that would lead both male and female clinicians to where they are today, enjoying the benefits of vastly superior medical uniforms. Looking back, it seems safe to say that thousands of her peers are grateful she made the trip. It began in 2006. Lara Francisco, the founder of Medelita www.medelita.com, was frustrated with the quality of the women’s lab coats and clinician scrubs she was required to wear each day. A gifted Physician Assistant who had specialized in Emergency Pediatrics for almost ten years, initially at a major trauma center in New York City and later at one in Orange County California, she had always taken pride in her personal appearance. Her professional appearance was another matter entirely. When you’re in emergency medicine, you’re typically meeting the patients you treat for the very first time. The old adage – you never get a second chance to make a first impression – is certainly true in any circumstance where people are being introduced. But with the added anxiety that can accompany an unplanned visit to the emergency room, that instinctive evaluation can assume greater scrutiny and heightened importance. That’s precisely why the ill fitting unisex lab coat and scrubs all the clinicians in the emergency room were required to wear was such a source of frustration, not to mention discomfort, even embarrassment. How can you make a positive professional first impression when you appear to have such low personal standards? Doesn’t that suggest you also have low professional standards? Surely no one could fault someone for assuming as much. How could it be, she asked, that some of society’s best educated, most respected professionals, as a class, tolerate presenting themselves to strangers looking so shabby? They don’t dress like that when they’re off duty. Many of the doctors have jeans that cost several times more than their lab coat and scrubs combined! Why then are they wearing such cheap, frumpy women’s lab coats and clinician scrubs that look like pajamas to meet patients and their families? The answer she learned was – they didn’t have a choice. The medical apparel industry, apparently in an effort to save money on design and inventory, “invented” a new reality just for clinicians. Coining the word “unisex”, they maintained to the very people who would know better than anyone else how preposterous such a proposition was, that women’s and men’s bodies were actually the same! Consequently, there was no need for gender specific patterns or sizing. The same garments could fit either sex equally well, they maintained! As it turns out, the last claim was actually true – both men and women looked equally pathetic. Lara searched everywhere for quality women’s lab coats and clinician scrubs but couldn’t find any. So, recognizing that the source of her frustration might also represent an extraordinary opportunity, she started educating herself on how to create a successful start-up company in the garment industry. By 2008, her company, Medelita, was launched. The entire initial product line consisted of one exquisite women’s lab coat and one equally innovative set of women’s clinician scrubs. The response to these limited offerings was, nevertheless, enthusiastic. Perhaps predictably, Emergency Medicine and Plastic Surgery were among the first specialties to exhibit their appreciation for the profound advancements achieved in: As awareness of the product line grew so did sales. Then the company hit its first formidable obstacle. Group practices with both male and female clinicians objected to just the female clinicians receiving such superior quality women’s lab coats and scrubs when there was nothing comparable available anywhere for the male partners. So Medelita developed equally impressive men’s lab coats and clinician scrubs. Today, the company has several styles of women’s lab coats and scrubs, and men’s lab coats and scrubs, in addition to special dental lab coats for both sexes that are comparable to the medical lab coats in fashion, fit and function, in addition to being OSHA compliant. The original plan may have been to solve one very specific problem, but in the course of doing so a new paradigm was created for the medical apparel industry – premium, hand tailored, designer lab coats and scrubs sold directly to clinicians. Lara, who still maintains her PA license, is now the CEO of perhaps the most innovative medical uniform company anywhere. Its accelerating growth defies the economic conditions plaguing so many businesses these days. The basis for that success is attributable, in part, to her vision as well as her commitment to continuous improvement in the company’s apparel, presence, service and value. To achieve and maintain such high standards of quality, Lara recognized early on that perhaps the most valuable gift an entrepreneur can be blessed with is a talented and dedicated team of managers and employees. The team she has assembled is undoubtedly the company’s greatest asset. The fact that they share the founder’s devotion to serving its very special customer base makes the daily challenges worthwhile, even gratifying. As a result, in an industry dominated by giants, this still comparatively small company is playing a disproportionate role in supporting clinicians everywhere. If you haven’t availed yourself of their exceptional lab coats and scrubs, we confidently encourage you to do so.
Back To The Team