Its not yet November, but lets take some time to be thankful for how far the medical industry has progressed. Medical knowledge improves and evolves every day, hospitals are (usually) extremely sanitary environments, and medical instruments must be tested and approved for safety.

But the world of medicine wasn't always this way. Check out these outdated medical instruments from the past and try your best not to cringe! 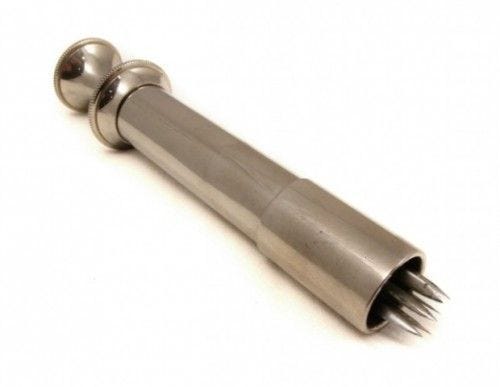 Bloodletting was a common practice throughout history, dating as far back as 2,500 years ago. In the 1800's an artificial leech was created for use in eye and ear surgery. Artificial leeches varied in design, but all had two critical elements: rotating knives or lancets to puncture the skin, and a cylindrical syringe used as a vacuum to suck up the blood. 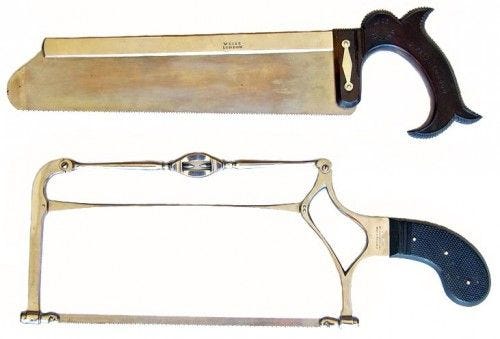 Before the 1800's, amputation knives were typically curved so that a physician could make circular cuts to the skin and muscle before cutting through the bone with a saw. These eventually gave way to straight-edged blades that allowed physicians to leave a flap of skin to cover limb stumps, but no surgical kit was complete without a surgical saw. Some surgeons advertised their wealth and prestige with amputation saws decorated with engravings, but the ridges and rivets of these engravings proved to be excellent breeding grounds for bacteria. 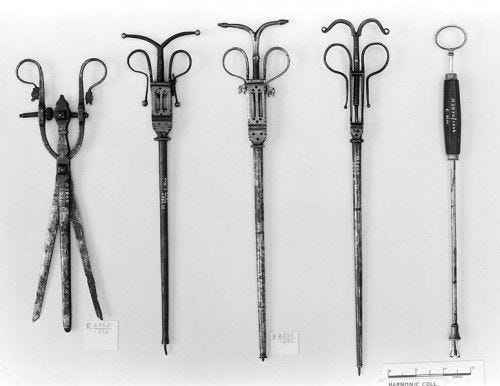 CC BY 4.0 (http://creativecommons.org/licenses/by/4.0)], via Wikimedia Commons

Bullet extractors were invented in the 1500's and grew in popularity as firearms and weapons became more prevalent and sophisticated. A physician would insert this instrument into the bullet hole, where the center piece would extend from the metal head of the instrument to pierce a bullet left in one's body. The physician would then pull the entire instrument out from the patient's wound. 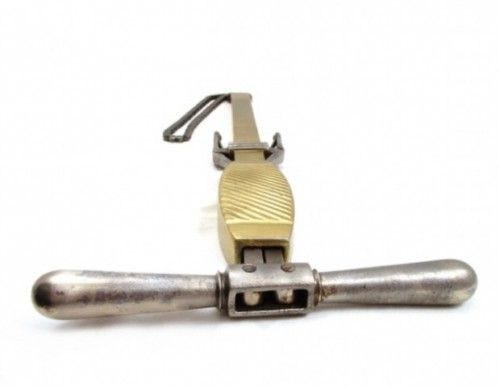 These slightly terrifying medical instruments were used to treat hemorrhoids in the 1800's. The physician would loop the chain at the top end of the instrument over the bleeding mass and use the ratchet levers at the bottom to crush the mass, resulting in strangulation and preventing blood circulation to the afflicted area. This tool was also popular for treating cervical cysts and tumors because the crushing mechanism resulted in less bleeding than with a traditional scalpel. 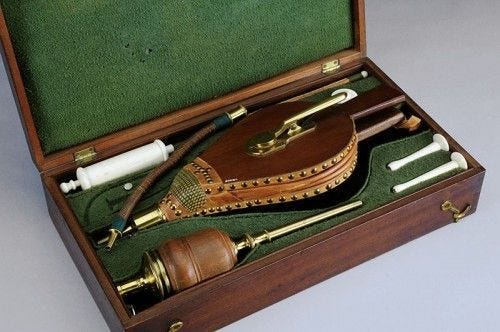 This enema was used to treat a number of medical conditions, most commonly to resuscitate a victim of drowning. A rectal tube would be inserted into the anus, connected to a fumigator and bellows filled with tobacco smoke. The smoke would then be forced into the patient's anus, where it was thought that the warmth of the smoke would boost respiration. And in case you were wondering, this is where the phrase "blowing smoke up someone's a--" originated from. 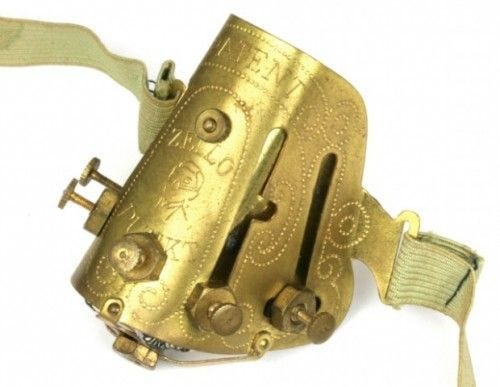 This tool was used to correct a deviated septum or other nasal deformity. The metal device would be held over the nose and secured with the elastic bands, at which point the screws would be tightened into the nose. It was thought that this would correct any nasal asymmetry as well as other nasal conditions, but of course it was completely ineffective and was outdated soon after its inception.

It kind of looks like an antique curling iron, but this tool was actually used for extracting bladder stones. The name derives from a French translation of "hidden knife", and the tool consisted of a pointed knife tip and a plunger or lever mechanism, which would move the blade forward and backwards. When used properly, this tool could be used to make incisions in body tissues and cavities. This tool can also referred to as a lithotome. 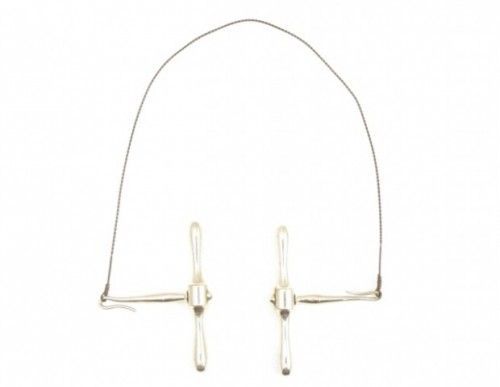 Trepanation, which involves drilling holes in the skull of a patient to treat a number of conditions, is sometimes still used today but for the most part is considered a medical treatment of the past. This surgical brain saw would be used to remove fragments of skull: three trepanation holes would be made in a patient's skull, where the flexible wire chainsaw could be looped under the skull using the hook-like handles. The physician would then be able to saw triangle-shaped pieces of the skull for removal. 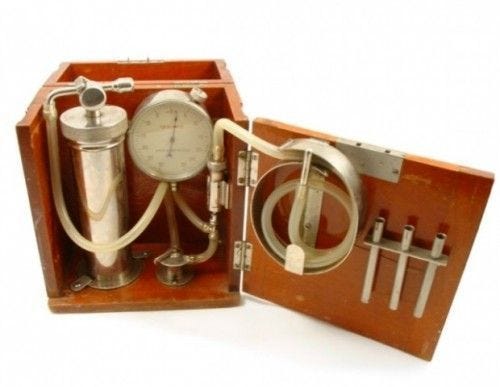 This elegant looking contraption was developed in the early 20th century by an English urologist. It was designed to treat tuberculosis by inducing a patient's lung to collapse in the mistaken theory that TB was less easy to spread through a deflated lung and that a collapsed lung would promote faster healing. After making an incision into the pleural section of the chest, the tube would be passed into the intrapleural chest cavity where it would blow air and force lung collapse. 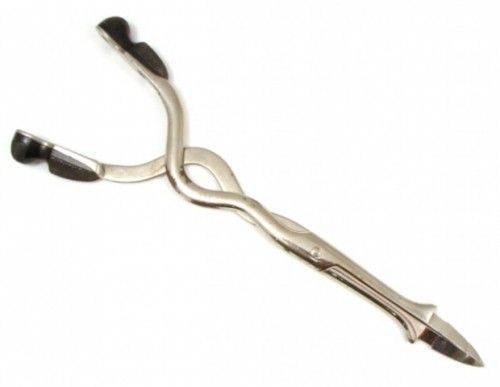 Not for the faint of heart, perforators such as these were used in the 1800's to save the life of a mother in obstructed labor. Though certainly grim, these instruments were only used as a last resort to save the mothers' life. The perforating tip could be manipulated by using the device levers to puncture and collapse the skull of a fetus, which would allow the fetus to pass more easily through the cervix. 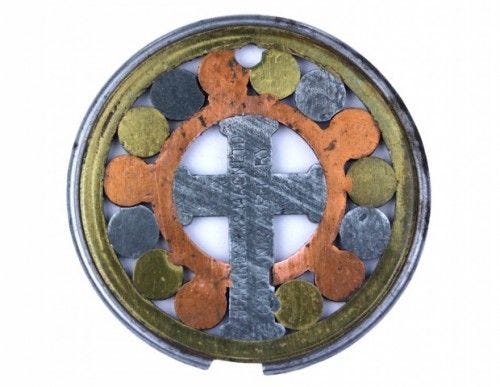 With the exciting discovery of electricity, galvanism became very stylish in the late 18th and early 19th centuries. It was thought that electrical currents were the driving forces of life and vitality, and jewelers began to cash in on this trend by creating intricate pendants composed of varying metals placed next to each other to generate a slight electrical current. Pendants such as this were advertised to have a number of healing properties for the wearer.