One of the most frequently discussed topics of debate in healthcare is the ethics surrounding medical research and certain studies. The U.S. Department of Health and Human Services (HSS) has been actively working to enforce new protections for research subjects, but regulations were not always stringent. Here are some of the most unethical medical studies from history:

In 1994 President Clinton appointed a special advisory team to investigate human radiation experiments that had been conducted over the years. When the world’s first atomic bomb was about to be launched in 1945, doctors began injecting patients with plutonium to better understand the effects of radiation on the human body. Many of these patients did not consent to be a part of these studies - including children who were unknowingly fed radioactive oatmeal from Quaker Oats Company, who was a co-sponsor of the studies . Though several government officials were aware of the studies throughout the years, it took decades for details of the experiments to be brought to light. Clinton’s investigation resulted in a mandatory procedural review of all organizations conducting human research, and a new committee to oversee research efforts.

During the 1950's the CIA became interested in developing new interrogation techniques. Their goal was to learn how to prevent captured CIA agents from divulging secret information, and also how to better manipulate enemies that they imprisoned. Some methods were more or less harmless, such as hypnosis, but other commonly tested methods included administering harmful, perception-altering drugs like cocaine and heroin. In fact, over 6,000 U.S. military soldiers were given LSD without any type of consent.

One of the most notorious cases of unethical research, the Tuskegee Syphilis Study involved the denial of syphilis treatment to African-American males in Alabama. Subjects were lured into the study by advertisements for a special treatment, and were promised free meals, transportation, and assistance with burial costs in case of death. They were never actually given details about the disease they had been diagnosed with, nor were they aware that the spinal tap diagnostic was not actually a treatment. For most individuals there would never actually be any type of treatment, as placebos were deceptively given instead. The study started in 1932 when the treatment of syphilis was still uncertain, but by 1947 penicillin was the standard cure for the disease. The researchers did not use the drug to cure their infected subjects, and instead kept conducting research up until 1972. 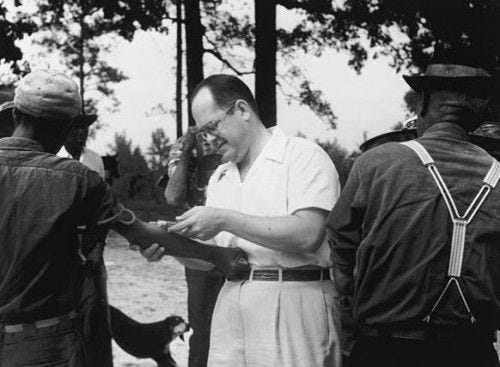 Between 1950 to 1973 a series of interrogative and mind-control studies were developed as a part of the MKULTRA program. Each study had different goals, but all were unethical in their own way. One study aimed to explore the effects of LSD on non-consenting individuals, and used prostitutes as test subjects. Prostitutes were hired by the CIA to take individuals back to designated “safe houses”, where they were then watched from one-way mirrors and given copious amounts of LSD.

In a separate mind-control experiment, the treatment was even worse. Dr. Ewen Cameron's mission was to mentally break the individual to the point where their mind was a clean slate. For the initial phase Cameron would use drugs to induce a longstanding state of coma, and then administer hundreds of shocks with electroshock therapy. The second phase involved being cloaked, and playing recorded voice messages for hours upon end to manipulate the subject’s thoughts. Children were also used as test subjects. In order to secure continued funding, Cameron blackmailed high-ranking officials.

Today it is well known that there are multiple strains of Hepatitis, but that discoverycame as a result of studies conducted at the Willowbrook State School for mentally disabled children. The school was overcrowded and running rampant with the hepatitis disease. Enter Dr. Saul Krugman, who had a goal to protect children from hepatitis and saw the school as an ideal research environment. Over a span of 15 years, over 700 children were purposely infected with the disease and researchers observed varying symptoms in each child. This variation of symptoms eventually led to the realization that there were two types of Hepatitis, A and B. Parents had been given consent forms to sign, but many were led to believe that admittance to the school was contingent upon consenting to the hepatitis experiments. The study raised many important ethical questions regarding experimentation on mentally disabled children rather than consenting adults.