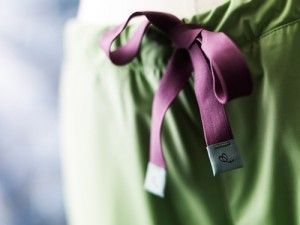 We know that lab coats were adopted from scientists, but what is the origin of scrubs?  In the early 1900s, surgical procedures occurred in an operating theater - an amphitheatre with tiered seating that allowed people to watch doctors perform surgery. Unlike the white, formal uniforms long required of nurses, surgeons wore their own clothes well into the 20th century.  Most surgeons actually wore a butcher's apron. And the mark of a successful surgeon seemed to be defined by the quantity of bloody stains on his clothing, from operating with bare hands and non-sterile instruments. In those days, sutures were sold as open strands with reusable needles, and packing gauze came from the floors of cotton mills. The practice of ‘pretending to be a butcher’ by doing surgery for an audience thankfully stopped after the 1940s, when everyone realized that it was both dangerous and distasteful.  Scrubs as an official uniform didn't become popular until the 1970s, though, because they were easier to clean and more hygienic.  The first surgical scrubs were white to emphasize this new standard of cleanliness. However, the bright operating lights in an all-white environment caused eyestrain. So by the 1960s, most hospitals had switched to shades of green to provide visual contrast and make stains appear less obvious.  These green scrubs were originally known as "surgical greens" but came to be called "scrubs" because they were worn primarily in a "scrubbed" (sterile) environment. As far from bloody butcher aprons as you can get, Medelita scrubs are functional, professional, and perfectly matched to the task at hand. Medelita scrubs are made with a high-performance drirelease® with FreshGuard® fabric. This means that the fabric itself is moisture-wicking, quick drying, and soft. Drirelease® yarns pull moisture away from the skin and help to regulate skin temperature, minimizing sweat and discomfort.  FreshGuard® is bacteriostatic; it neutralizes and inhibits the growth of bacterial odors.