Mary Mallon, commonly known as “Typhoid Mary” was an Irish immigrant who moved to the United States in 1833. She was said to be blonde, with a thick figure and a brogue accent that never faded even after years living in the states, where she worked as a cook for affluent families of New York. Mary was a typical immigrant worker making her way in a new country, and her legacy would have faded quickly had she not become the infamous icon of infectious disease that she is now known for. 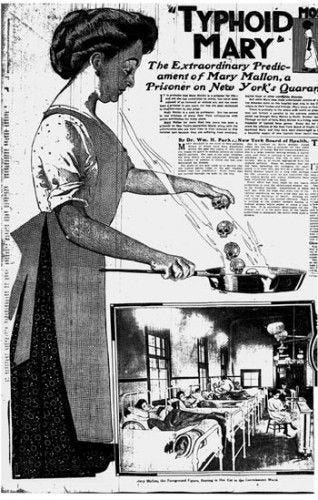 Let Us Set The Stage

In the early 1900’s typhoid fever was universally feared in the United States. It was a dangerous killer because of its innocuous nature—an infected individual would usually not show any distinctive symptoms for the first week, thus allowing it to spread quickly among households before the disease could be recognized. By the third week of infection, a victim would suffer internal hemorrhaging and brain inflammation. Mortality among victims of typhoid fever was estimated to be 10-30%. After doctors determined that typhoid fever was spread through bacteria, it was believed that the disease could be controlled. At the same time epidemiology was developing as a branch of science, allowing doctors to trace outbreaks of disease back to patient zero. At the cusp of so many medicinal advancements, society felt slightly more at ease that outbreaks of the disease would diminish. So when 6 out of 11 family members from New York came down with typhoid fever during the summer of 1906, an investigator was hired to determine what had caused the outbreak. The investigator determined that the most likely cause was the cook, Irish immigrant Mary Mallon. Upon further investigation it was discovered that seven other families that Mary had worked for had become infected with typhoid fever as well.

But How Could Mary Be Patient Zero?

There were two apparent flaws in the argument that Mary was at the root of these outbreaks. The first was that Mary Mallon was the very picture of health, and displayed no symptoms whatsoever. The second issue is that even if she was carrying the disease, cooking raises food to temperatures high enough that any typhoid bacteria should be killed. These mysteries were solved rather quickly. One of Mary’s famously popular recipes was her refreshing sorbet, served with fresh peaches--an ideal environment for bacteria to survive long enough to be eaten by a victim. Denying any responsibility for the outbreaks, Mary vehemently tried to evade health officials; she is even reported to have brandished a meat fork at an investigator to chase him out of her kitchen. However, blood, stool, and urine samples were eventually collected, confirming the presence of typhoid bacteria in her system and proving that Mary was indeed a “healthy carrier”. 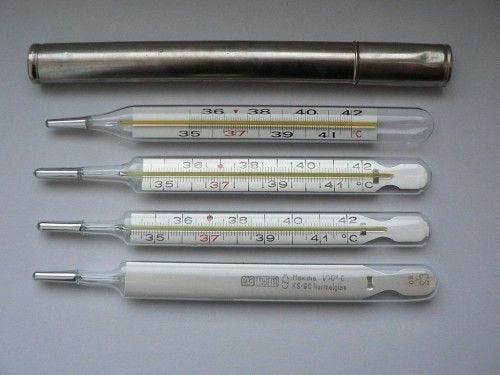 Image by Zwager (Own work) [Public domain], via Wikimedia Commons

Mary couldn’t fathom being accused of spreading the disease since she was in perfect health, displaying no symptoms whatsoever. She resisted fiercely, but was eventually detained by the New York Health Department and sent to the secluded 16-acre North Brother Island off the coast of the Bronx. The island was home to Riverside Hospital, but because of her condition Mary lived in a remote cabin where she was kept in near complete solitude. Her only companion was a dog. Mary’s harsh confinement raised moral questions amongst the public. Mary had not broken any laws, and though society still feared typhoid fever, Mary was not sick and never once displayed any symptom of illness. Through no fault of her own, Typhoid Mary was a healthy carrier of a deadly disease that she was immune to. The public largely sympathized with the woman, who believed she was being unfairly persecuted for something she could not control.

Release From The Island

After 3 years of relative solitude on the island, the health commissioner allowed her to leave under the condition that she never again resumed her position as a cook. She was given a job as a laundress and then quickly disappeared from officials. Typhoid Mary did not truly become infamous among society until five years after her release from the island. In 1915 there was an outbreak of typhoid at Sloane Maternity Hospital. By the time health officials eventually discovered a “Mary Brown” working in the hospital kitchen, 25 typhoid victims had already fallen ill, 2 of whom had died. Mary fled immediately, but she was quickly captured and sent back to her secluded island, where she lived in exile until her death 23 years later. During her lifetime, she had infected 51 individuals with typhoid fever. 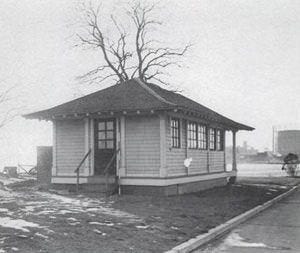 The cottage where Typhoid Mary spent her 26 years of isolation.

Upon Typhoid Mary’s second quarantine, public sympathy for her had all but evaporated. By this time, it was known that there were likely many healthy carriers of the disease walking around without having a clue of it. But Mary was a known carrier of the disease—though she refused to believe it up until her death—and despite this she decided to resume work as a cook under an alias, resulting in illness and death of innocents. The fact that she used a pseudonym further assured the public of Mary’s guilt. She had knowingly, and perhaps maliciously, caused pain and death among those she worked with. Typhoid Mary became a public symbol of patient zero, and she remains so to this day. Not until recently have scientists discovered how individuals such as Mary Mallon could be infected without having any symptoms. Macrophages designed to kill foreign bacteria become inflamed in the early stages of infection, but after a few days of fighting the foreign bacteria these macrophages would have become less aggressive. At this point, a typhoid bacilli is able to penetrate macrophage cell membranes, where they can live silently within the cell. Even today, this type of “healthy carrier” ailment is deadly to others and very difficult to cure.