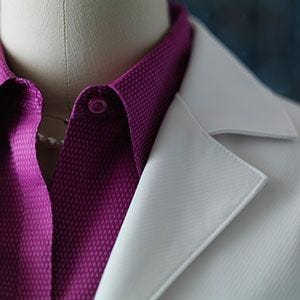 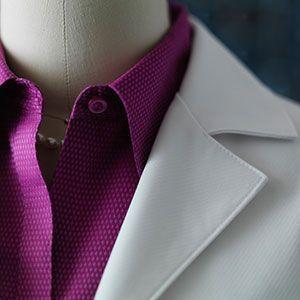 For decades, the women’s lab coat female clinician’s have worn has been a generic garment that ignored virtually every principal associated with women’s fashion. It had become, at best, a utilitarian garment made of cheap, functionless, often coarse fabric. The shape was based on straight lines, right angles and the absolute minimum number of seams, to keep sewing costs as low as possible. The construction and finishing of hems, seams, pockets, and even buttons was often more shoddy than the cheapest clothing found at a discount store, which is why most were guaranteed for no more than 30 days. Why even the sizing displayed a complete disregard for fit as unisex sizing of lab coats became the industry standard – with its nonsensical premise that the exact same coat could fit a woman or a man equally well. Every aspect of design was dictated by cost, with the lowest cost option typically prevailing. The medical apparel industry was convinced that lower prices led to higher sales so their product reflected that belief, however erroneous it may have been. Into this vacuum of consideration for fashion, fit, and function stepped a young couple ideally suited to recognize the opportunity for a medical apparel company embracing precisely those priorities and capitalizing on them. Lara Francisco had been a Physician Assistant specializing in Emergency Pediatrics at major trauma centers in New York City and Orange County California for almost ten years. Joe Francisco had been Vice-President of Sales for the western United States for a very successful high-end carpet company. Lara detested the shabby women’s lab coat she was required to wear each day. When she was unable to find a single source anywhere in the world for a quality women’s lab coat, she was determined to create a company to manufacture them. Joe was eager to seize an opportunity to apply his experience with high-end sales. He also recognized this as a way to apply his interest in new economy marketing to the fastest growing industry in the nation, healthcare. He eagerly joined their start-up company which Lara named Medelita. When the company was first launched in 2008, the initial product line included just one women’s lab coat, but it was vastly superior in virtually every way to every other women’s lab coat available anywhere in the world. The features included: That first women’s lab coat, which was called Callia, is still one of the top sellers in a product line that now includes several different models in various lengths. The additional cost of manufacturing a women’s lab coat with much more expensive materials and fabrication costs is mitigated considerably by the company’s policy of selling directly to the clinician, as opposed to brick and mortar or internet retailers who typically use a keystone mark-up amounting to 100% of their wholesale product cost. Still, even with a distribution system that bypasses that substantial mark-up, the cost of a typical women’s lab coat from Medelita can be several times the price of the commoditized versions. So why do clinicians pay a premium for a woman’s lab coat from Medelita? The unsolicited testimonials from female physicians, physician assistants and nurse practitioners available on their website www.medelita.com say it best. To summarize, these are the primary reasons offered: The real issue is not that a women’s lab coat from Medelita is so expensive, because it’s not. Given the quality, it’s actually an exceptional value. The issue is the commoditized generic lab coats they’re being compared to, which are so ridiculously cheap, but understandably so. As they say, it’s like comparing apples to oranges. If you haven’t had an opportunity to try on a women’s lab coat from Medelita you cannot appreciate just how superior they are. Consider ordering one without embroidery and trying it out. If you don’t agree with your peers, just send it back and receive a full refund. The success of the company is based on one simple affirmation passed on by word of mouth from peer to peer, “Just try it on.” We encourage you to do so.
Back To The Team