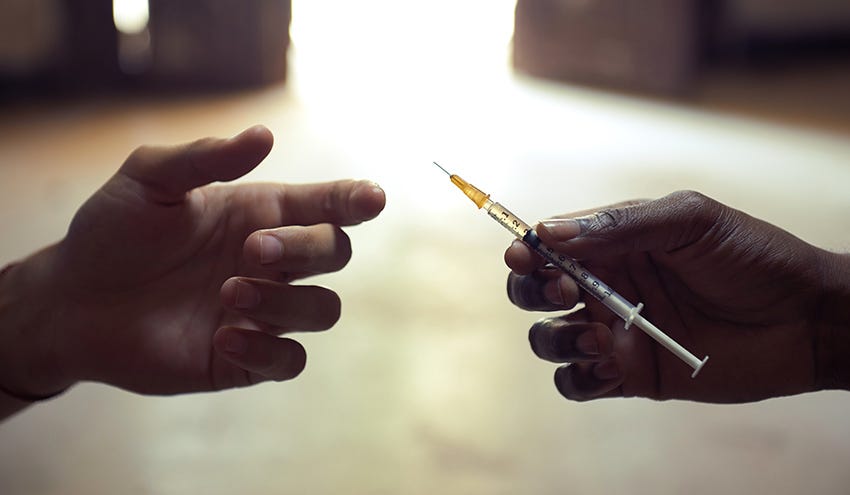 The heroin and painkiller (opioid) epidemic has accounted for 60 percent of American overdose deaths, including over 47,000 deaths in 2014. Because of these overwhelming numbers, more and more leaders and healthcare professionals in the U.S. have shifted their focus on saving lives of addicts, making the idea of doctor assisted injection facilities (for lack of a better term) worth a shot.

"Things are getting out of control. We have to find things we can do for people who are addicted now," said New York state Assemblywoman Linda Rosenthal. "The idea shouldn't be dismissed out of hand. I don't see anyone else coming up with anything new and innovative."

Since 2008, shoot-up centers in have sprang up Amsterdam, Sydney, and Vancouver to prevent overdose death, as well as reducing crime in the community by supplying these potential criminals in search of a ‘score’. Certified trained medical professionals are onsite at these locations to administer the widely relied upon anti-overdose medication NARCAN in the case of an overdose, which are common within injection facilities. Insite, located in the heart of Vancouver's Downtown Eastside neighborhood, offers patient treatment services just one floor up from the supervised injection site and sees an average of 20 overdoses a week from heroin abusers. Astoundingly, Insite has yet to record a single death since its opening.

"Heroin Havens" in the U.S.

The success of these programs abroad have many aggressively seeking funding for even more injection facilities across America to augment existing clinics operating in 33 states. Lawmakers and city officials from the east coast to the west are urging for more funded shoot-up rooms modeled after those abroad that have been serving patients since as early as 2008, including Amsterdam, Sydney, and Vancouver.

Funded injection facilities aim to serve as a safe haven for addicts to receive empathetic medical care, a light at the end of a very long and dark tunnel. This tunnel, as addicts, friends, and family know all too well, hardly ever has a light at the other end of it. With her face covered in scabs, 33 year old heroin addict Rhea Jean, after wiping her mouth from recently vomiting immediately following an injection, had this say about Insight to The Associated Press.

"It's a great place for active users in full-blown addiction.” added Jean. “It links you up to other programs."

A white flag for drug addicts

Though U.S. federal law effectively prohibits injection facilities, legislators at the state and city level have the power to authorize them within their jurisdiction. By giving this power to local government, Washington officials could adopt a hands-off approach similar to the federal response to state medical marijuana programs.

This new approach has been less than warmly accepted by many US officials who criticize that proposed injection facilities  are equivalent to waving a white flag at an epidemic that should be fought with prevention and treatment.

"It's a dangerous idea," said John Walters, drug czar under President George W. Bush. "It's advocated by people who seem to think that the way we should help sick people is by keeping them sick, but comfortably sick."

Good, bad, or indifferent… it is an innovative approach to saving lives from the deadly addiction of heroin.