Mention “electronic health record” or EHR’s in a room of doctors and you’re likely to hear a collective groan. The technology created to streamline the flow of health information and improve overall healthcare delivery is actually doing the exact opposite. Doctors have become increasingly frustrated with the EHR software they are compelled to use, exasperated by the technology intended to simplify their lives.

When done right, healthcare IT has the capacity to save thousands of lives and millions of dollars. EHR’s have the potential to deliver better, higher quality healthcare services by leveraging digital healthcare and big data to allow health information to flow seamlessly. This would streamline the administrative tasks associated with healthcare and enable doctors to make better, more well-informed decisions.

The idea of electronic health records sounds amazing in theory. Think of all the paper saved, medical records no longer hidden in the adminosphere, how meaningful it would be for doctors to be able to aggregate and share health data. Shifting from paper records to digital seems like a no-brainer that would simplify a doctor’s job in many ways.

However, as many doctors complain, this is rarely the case. Lack of usability in the EHR software products currently available have led many doctors to view digitizing healthcare information as a bigger burden than its worth. Complicated and superfluous user interfaces load physicians with a greater administrative burden. This both contributes to physician burnout and creates a productivity drain that distracts physicians from focusing on their job of providing excellent patient care. 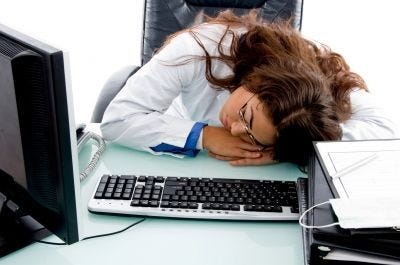 Image courtesy of imagerymajestic at freedigitalphotos.net

EHR advocates will argue that a lack of cohesive training and implementation within hospitals and healthcare systems is to blame, but this doesn’t seem to be the case for many EHR users. Pediatrician Dr. Dave Denton from Idaho is chairman of the IT committee for his hospital, and he is even more frustrated by the challenges of EHR’s than the average doctor because he understands how much potential this technology has to deliver useful digital medical information and reduce costly/fatal workplace errors.

In a Coursera discussion forum, Dr. Denton wrote, “[EHR’s] all are encumbered by poor graphic user interfaces that make it hard to see patient data in a way that makes sense and helps patient care. It is actually much harder to take care of sick patients in the ICU with our new hospital system…I have made several errors by failing to find the correct information in the chart because it was buried in the note. Finding what is important has become a treasure hunt.” In Dr. Denton’s eyes, the vast potential of an effective EHR system is obstructed by the poor software systems available on the market today.

The most glaring problem with today’s EHR software systems is a lack of inter-operability between systems. There have been reports of many EHR vendors creating proprietary standards for their software that block their products from operating with other systems. This means that even if EHR’s were able to collect health information in a more efficient manner that doesn’t put a strain on doctors, most of the software systems available just create walled-off information archives that are inaccessible to anyone outside that particular system.

The lack of EHR inter-operability effectively undermines any information-sharing between two different systems and nullifies any benefit of storing information electronically to be shared and learned from. Instead, doctors’ workflows have become disrupted by a technology that has yet to live up to its promises.

Of course, there is no simple solution. From the suppliers' side, usability and systems compatibility have taken a backseat as EHR vendors focus on making sure their software will meet government guidelines. From a demand side, even if a better EHR product was developed, many hospitals would be reluctant to switch to a new system for financial reasons. Electronic health records hold tremendous potential, but in order to work as envisioned vendors will need to place a much greater focus on systems compatibility and user friendliness.