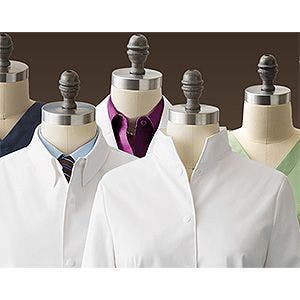 Medical clothing is at last undergoing a revolution. For decades clinicians have been showing up for work in the equivalent of their pajamas (scrubs), and a frumpy lab coat that once was white. It’s ironic that the profession with perhaps the highest academic requirements and stature in our society has for so long tolerated what has to be one of the lowest standards for personal appearance in any industry. The explanation for this reveals that the abysmal medical clothing worn by clinicians (physicians, physician assistants and nurse practitioners) was not attributable to some genetic disposition to poor taste in clothing by individuals with advanced degrees. After all, outside of work these same people are typically considered very well dressed. The explanation is simple – they didn’t have a choice. We’re not sure if conspiracy is the right word, but the medical apparel industry seems to have gone to great lengths to limit production costs on medical clothing for clinicians. They even coined a word, unisex, that they would have you believe legitimizes the notion that, contrary to what is taught in med school, there are no significant differences between the anatomy of the human male and female. In fact, they contend, to doctors no less, that the shoulders, chest, waist, hips, and their proximity to the crotch are the same for a man and woman. How else can you explain decades of scrubs and lab coats manufactured with unisex sizing, which in its effort to accommodate everyone, accommodated no one? The motivation for the medical clothing manufacturers seems clear. If they could get clinicians to accept their premise, however illogical it may be, they could save fortunes on design and inventory costs. What other explanation could there possibly be for such a nonsensical notion being foisted upon the very professionals who should recognize its absurdity before anyone else? And if that weren’t bad enough, to squeeze even more profit out of this niche market, they began cheapening the fabrics. Why not? As long as everyone in the industry did it, what alternative was there? Then a new company came along and spoiled the unisex profit machine. It’s probably not a coincidence that it was founded by one of those clinicians who had had enough of this nonsense. She refused to tolerate the uncomfortable, non-functional, ill-fitting uniform she was required to wear in the emergency room some 2000+ hours per year. She was embarrassed to stand before a patient, or their family, dressed in such unflattering garments, exhibiting such low standards for personal appearance. What did such low standards suggest about her professional standards, she wondered? If none of the existing medical clothing companies were interested in addressing this problem, she decided that she would. In fact, summoning some latent entrepreneurial instincts, she decided to approach it, not as a problem, but as an opportunity. The company she created is Medelita, www.medelita.com and the effect has been nothing less than a paradigm shift for the medical apparel industry. Medelita not only introduced gender specific, traditional sizing for clinicians, it revolutionized the standards for fit, fashion, and functionality. Her company created a new value equation enabling more expensive but infinitely superior product to be recognized as a better value – on a cost per wearing basis – since in addition to the benefits it provides to the wearer it lasts so much longer than the cheaper, inferior alternatives. In the process, Medelita established such high standards of excellence for design, production standards (with hand-sewn, beautifully finished apparel) and personal service that the large uniform manufacturers, with their radically different scale of operation, are simply not in a position to match this new business model. As a result of this innovation from Medelita, the medical clothing industry is being transformed from serving the needs and priorities of the industry’s suppliers, to serving the needs and priorities of its customers. Clinicians worldwide are expressing their appreciation with orders and unsolicited testimonials.
Back To The Team