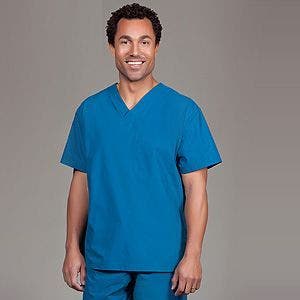 The advancements in men’s scrubs over the last five years have dwarfed the advancements in men’s scrubs over the previous fifty years. For decades, medical scrubs were designed not for the benefit of the clinicians who wore them, but for the benefit of the medical apparel companies that made them. In fact, this orientation was so pervasive and was perpetuated for so long that it would be fair to say the ill fitting, functionless, uncomfortable garments known as unisex scrubs became an intrinsic part of the medical culture. If you were in medicine and wore scrubs it was accepted, even expected, that you’d come to work each day looking like you’re wearing pajamas – not necessarily yours. The motivation for the medical apparel manufacturers was obvious. If they could get the healthcare industry to accept the premise that the same scrubs could be used interchangeably by a man or a woman, a concept they attempted to legitimize by coining the word unisex, then they could cut their inventory and design costs in half. With hindsight, the fact that doctors, who study anatomy as part of their training, actually bought into this scam, is astonishing. Their tacit acceptance of the contention there were no meaningful differences between the shoulders, chest, hips, waist, buttocks and crotch of the male and female body, is a testimonial to the fact that if you maintain a position long enough, especially in the absence of any alternatives, people, even those who should know better, may simply accept it. Predictably, in their effort to accommodate everybody, the unisex scrub makers satisfied nobody. Then in 2008, a different kind of medical apparel company was formed. The founder was not from the garment industry, but from the healthcare industry. She knew precisely what the healthcare market needed, because she was a member of that healthcare market who wore the product every day. She approached this opportunity with no preconceived notions or limitations. Whereas the existing medical apparel industry operated within strict limits dictated primarily by their conviction that the lower the cost the higher the sales, she was objective, analytical, and innovative. The resulting product lines, while still complying with the traditional description of medical scrubs, represented dramatic improvements in fit, comfort, fashion and functionality and as a result was responsible for the top advancements in men’s scrubs. Here’s a list of the top advancements in men’s scrubs, virtually all of which can be traced back to the founding of that medical apparel company in 2008:

What company pioneered the top advancements in men’s scrubs? Medelita Mens www.medelita.com . Learn more about this innovative company to better appreciate how enthusiastically these improvements are being welcomed by clinician’s like you. Spend a few minutes on their website paying particular attention to the numerous unsolicited testimonials offered by your peers. It may give you a whole new perspective on how these advancements in men’s scrubs have become an important part of a much larger revolution currently taking place in the medical apparel industry.